The musical origins of Number 4, Petrie Terrace didn’t begin with the ASPIRE International Youth Music Festival. While the two-storey space in Brisbane is now the home to the Australian branch of Student Horizons, Number 4 actually began as the home, rehearsal space and live performance venue of Australian punk rock band The Saints.

Back in 1976, what is now the base of our educational tours and the ASPIRE International Youth Music Festival, was once known as Club 76. The former shopfront was first occupied by singer Chris Bailey and drummer Ivor Hay, and became their performance venue when the band ran into recurring trouble with police breaking up their gigs, and subsequently finding venue bookings difficult to obtain. Attendance rapidly grew from a few friends to an audience enough to fill the building! Australian music journalist Clinton Walker described the shows as, ‘a humbling, thundering thing to experience’. Club 76 was unfortunately shut down shortly after, but the legacy of The Saints left a lasting mark on the history of Australian music.

The Saints were the first punk rock band outside of the US to release a record. As early as 1974, the group were already employing musical techniques that would become characteristic of the punk rock genre, well ahead of better-known groups such as The Clash and The Sex Pistols. They were inducted into the Australian Recording Industry Association (ARIA) Hall of Fame in 2001, and Bob Geldof of The Boomtown Rats said that “Rock music in the seventies was changed by three bands—the Sex Pistols, the Ramones and the Saints.” Kurt Cobain named their song ‘Know Your Product’ as one of his top 50 recordings.

The Saints’ time at 4 Petrie Terrace leaves a lasting cultural legacy that reaches far beyond Brisbane. Their extraordinary sound, their independent approach to their art, live shows and music was and continues to be hugely influential. 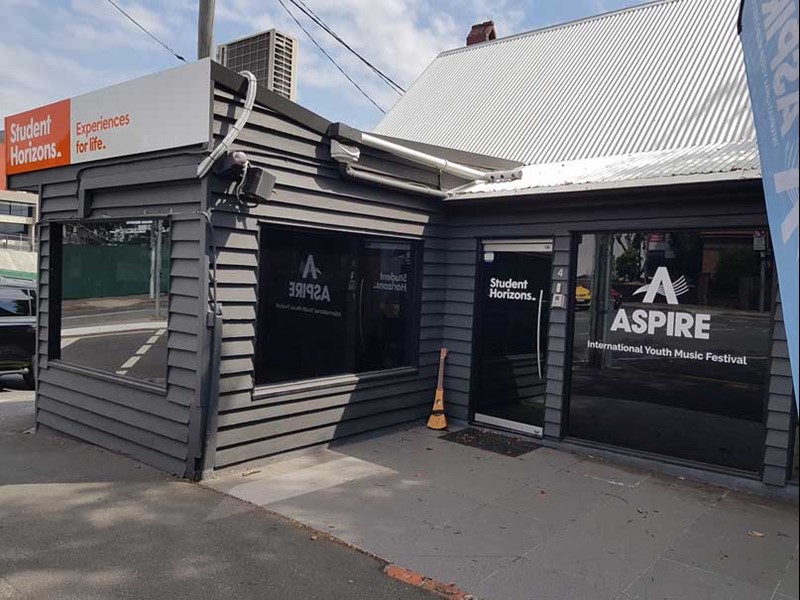 Today, Number 4 remains a place of musical orientation, but nowadays the focus is on providing opportunities to gifted students of classical music. Student Horizons moved into Petrie Terrace in 2016 to expand the work started in New Zealand, creating extraordinary travel experiences for secondary school students, and it was here that work first began on Student Horizons’ own youth music festival, ASPIRE.

The inaugural ASPIRE was held in Brisbane to great success. This year the festival is being held on the Gold Coast, to accommodate growing numbers and expand the reach to an even wider network of students. The whole team is dedicated to growing ASPIRE from Queensland’s premier youth music festival into a festival with worldwide reach, bringing young musicians from all around the globe together to compete, showcase talent, and build friendships.

Wherever the festival is based, the majority of the planning and organisation of ASPIRE will still take place out of Number 4, Petrie Terrace, and we are pleased and proud to be carrying on the musical traditions of this particular address! We hope to have the same influence on ASPIRE’s young attendees as The Saints have had on punk rock music.